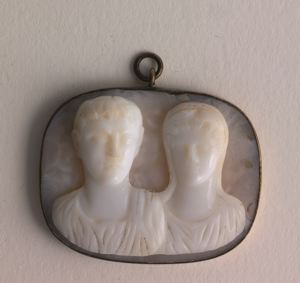 Cameo of a Husband and Wife

Created for private consumption within the family, such cameos were treasured heirlooms among the Roman elite. Cameos became particularly popular beginning in the 1st c. CE, and were carved from from colorful, semi-precious stone such as agate, sardonyx, and onyx, as well as shell and glass. The Bowdoin cameo, a fine particularly example of Roman luxury arts, is notable for presenting an intimate portrait of a Roman couple, a rarity among cameos. The man is foregrounded slightly; his left shoulder overlaps his wife and his head is noticeably larger. The duo wear traditional clothing that reinforces their status as elite citizens of Rome. The man is clad in a simple toga draped over his left shoulder, while the woman wears a palla, the mantle of a married woman, draped over her head. The dress, hairstyles, and facial features of both man and woman draw on the imperial portraiture of the Julio-Claudian dynasty and place this cameo in the 1st c. CE.