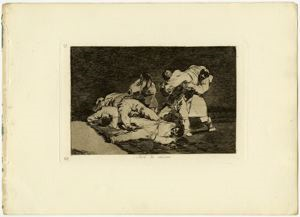 Será lo mismo (It will be the same.)

etching with aquatint on paper

Será lo mismo is a plate from Goya’s later Disasters of War series, produced during the Peninsular Wars (1808-14) that plagued Spain during the Napoleonic reign of Europe. The print reveals a horrific scene that Goya may have witnessed repeatedly during these years—mourners carrying corpses—though the lack of specific symbolism or historical context suggests a more universal theme. Goya’s unique ability to distill such timeless meaning from human behavior inspired generations of artists, from nineteenth-century French painters like Delacroix, Manet, and Degas; and through them the great artists of the twentieth century.