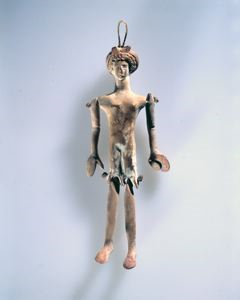 This undated terracotta doll depicts a female figure with separate arms and legs attached at the joints, white slip painted on the body, castanets in the hands, and bands around the hair. Although the rough shaping and construction of the body is more typical of the fifth century BCE, the delicately rendered Hellenistic face is unlikely to have been made before the third century BCE. The doll’s association with childhood defined the Greek and Roman ritual use of such “toys” as symbolic objects, which were placed in children’s graves or devoted to gods before adulthood or marriage. As with the other objects selected for this exhibition, the stylized abstraction of this natural figure underscores the potential to represent aspects of living beings that are indefinite and internal, yet broadly present in our own cultural realities and those of others.