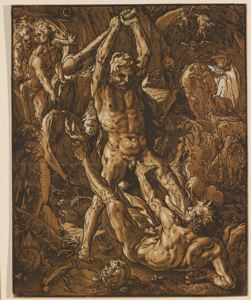 One of Hercules’s Twelve Labors was to capture the cattle of the giant monster Geryon. Hercules slew Geryon but lost some cattle on his escape to the monster Cacus, a fire-breathing giant and son of Vulcan who lived on human flesh. Grisly trophies of skulls and bones litter the monster’s cave on the left. On the right, the stolen cattle call to one another, while owls fly in confusion. Hercules, at the height of the battle, stands over the fallen Cacus, about to deliver the final blow. Goltzius adapted this posture from a print of Hercules by Rosso Fiorentino, an early Florentine Mannerist. Both Hercules and his victim display the lumpy musculature developed by the Haarlem school of Mannerist artists that expressed superhuman strength. The teeth and claws of Hercules’s lion skin augment the fierce intensity of the combat.