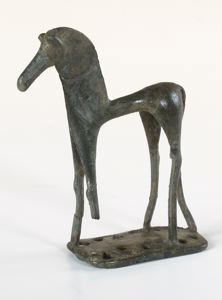 Geometric Statuette of a Horse

From religion and myth to combat, sport, and transportation, the horse figured prominently in ancient Mediterranean culture and art. Horses were among the earliest subjects explored by Greek artists and remained the most commonly depicted animal in vase painting and sculpture. Artists admired them as symbols of wealth, power, and prestige, but also understood their role as treasured companions of humans, heroes, and the gods. Representations of horses created during the Geometric period of the eighth century BCE document the connection between painting and sculpture. Early sculptures of horses, in profile, mimic closely the painted silhouettes of the animals as if the artist had pulled the form into a three-dimensional shape. In the ensuing centuries, as seen in the examples displayed here, more natural-looking forms were developed and the figure of the horse was appreciated from all sides.