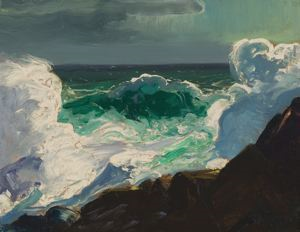 In the spring of 1913, George Bellows, part of a new generation of artists who became known as the Ashcan School for their interest in depicting the unvarnished urban scene, helped to organize the now-famous Armory Show, which introduced Cubism, Fauvism, and other forms of European modernism to American audiences. Wearied from that work and desolate following the death of his father in March, he, his wife Emma, and young daughter Anne ventured in July to Monhegan for several months of time away from the city. The island proved an inspirational setting, and he completed many important paintings that summer, including Green Breaker. In a letter to his mentor, the influential American modernist Robert Henri—written on the day that he completed this painting—Bellows remarked that “October which has been hailed and advertised as the great month of the year has been one continual wet blanket. There has been just one day that amounted to anything, when we had a tremendous sea and clear sunshine. The water looking like a raging snowstorm.” With thickly-applied paint that is as much shaped as it is brushed onto the panel, Bellows captures well the raw energy of the ocean. Lessons drawn from the Armory Show informed the composition and signaled a new chapter in the artist’s career.