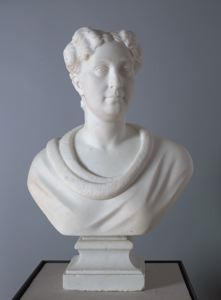 Edmonia Lewis was a distinguished American sculptor who spent many productive years in Rome. Forced to withdraw from Oberlin College after racially motivated accusations and assaults, Lewis—whose father was Afro-Haitian and whose mother was Mississauga Ojibwe—settled in Boston in 1864, where a group of abolitionist leaders supported her efforts to become a sculptor. Two years later she moved to Rome and became connected with a community of American expatriate artists and writers. This bust of an as yet unidentified female subject was carved there. Lewis gained international recognition for her work and made headlines in 1876 for her 3,000-pound marble sculpture The Death of Cleopatra, when it was exhibited at the Centennial Exposition in Philadelphia.