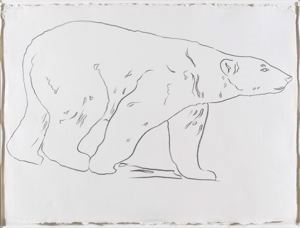 Warhol’s early screen-prints typically de-contextualized everyday objects to void their meaning and gave them new life as clichés of media culture. Warhol then carried this treatment to portraits of celebrities and subjects of political sensitivity that rejected customary interpretations and judgments. This drawing is a preparatory study for the screen-print portfolio Endangered Species, which was published in 1983 by Ronald Feldman Fine Arts in support of animals protected by the 1973 Endangered Species Act (ESA). Although a Polar Bear does not appear—and was not added to the ESA until 2008—scholars believe that Warhol drew (most likely traced from a photographic image) this image as he was exploring its possible use in the series. Such tracings were a necessary step in preparation of the screens used for printing. The drawing of the polar bear is all the more fascinating for the fact that this image did not make the cut.