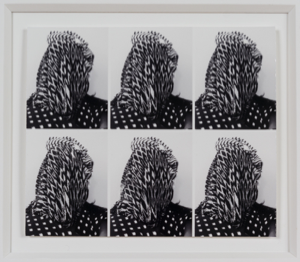 Stephanie Syjuco’s Applicant Photos (Migrants) #2 interrogates the system through which immigrants must document themselves in order to transition from one nation to another. In so doing, she offers a critique of the political regime of the face supported through the widespread use of photographic identification credentials. Her images, which deliberately cover the face in a fabric meant to evoke “colonial” materials, offer a spirit of resistance precisely through their appropriation of western textiles, often sold cheaply in first-world countries due to the exploitation of labor in countries with less robust economies. In a final, twist, Syjuco has turned the camera on herself to create these images, producing a “selfie.” Through this act, Syjuco draws attention not only to the ubiquity of a narcissistic impulse to picture the self, but the way in which such actions blur with the more deeply engrained structure of surveillance as a political tool of control.

Per Curator: Syjuco notes that “Applicant Photos (Migrants)” “was developed in conjunction with the larger photographic series, ‘Cargo Cults’, which was produced in Omaha, NE.