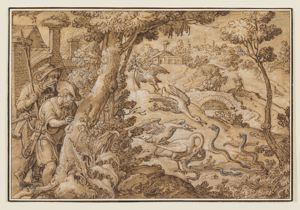 Two hunters shielded by a tree witness a fierce battle of storks against snakes. Royal menageries in sixteenth-century Europe featured bloody spectacles of interspecies fights to the death between exotic beasts, such as tigers and elephants. The bird and snake combat recorded in Book 10 of Pliny’s Natural History is described as taking place in Thessaly, Greece, where laws protected storks because of their snake-slaying potency. The engraving after this drawing has a four-line Latin verse below the image. It adds cranes to Pliny’s description and changes the locale: “Vast Appulia nourishes the scaly snakes. The crane and the stork attack their offspring. Here they wage a bitter war with beak and bite. This sportive event is watched by many farmers.”