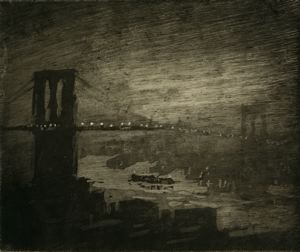 Though born in Philadelphia, Joseph Pennell spent most of his artistic career based in London creating romantic illustrations of European cities. In 1921, Pennell returned to America and settled in Brooklyn Heights, where he lived until his death. Pennell believed in the unique aesthetic qualities of modern American cities, and his apartment afforded great views of the Brooklyn Bridge and the New York skyline. While Pennell’s print foregrounds the bridge as a dark, hazy, and ominous structure, it can also be understood as a longtime expatriate’s fond reflections on what makes American cities distinct: namely, its immense verticality, unorthodox geometry, sweeping expanse, and modern aesthetics.