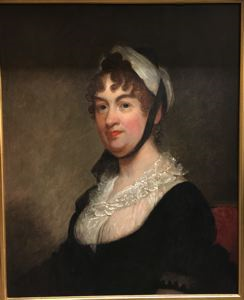 Elizabeth, James Bowdoin III’s older sister, stayed close to her brother throughout her life, even when she resided in London and New York, as the wife of John Temple, a career customs official in colonial New England and later the first British ambassador to the United States. Relocating back to Boston after her husband’s death in 1798, Lady Temple became an avid patron of Gilbert Stuart, who maintained a studio in the city starting in 1805. In 1806 she commissioned Stuart to create two copies of a portrait of her by John Trumbull for her daughters and to copy an existing portrait of her late husband, so each of them could have a set. This painting, believed to be the later of Stuart’s two copies, has a long history in the Bowdoin and Winthrop families. Elizabeth Bowdoin was keenly aware of the benefits of portraiture. She expressed in her letters that she missed having portraits of her parents when she lived in London. And she made sure her family in Boston had likenesses of her and her children around when she lived in New York.